Transvestites wear corsets to help create a more feminine shape. Not only does the squeezing of the corset make the waist more narrow (and therefore more feminine), but it also proportionally makes the hips and breasts appear to be fuller and rounder and more feminine.

Corsets are sometimes also worn by women in the role of bondage mistress, an assoociation going back to bondage artwork of the early 1900s, a time when women still wore corsets as an ordinary everyday clothing item.

Corsets were at their greatest popularity in the late 1800s and early 1900s, especially in Great Britain.

Women of the time commonly fainted because tight corsets prevented the ability to take deep breaths. The claim was that women fainted because they were inferior physically and emotionally to men, completely ignoring the real culprit: fashion.

The fashion of the waspish waist and hourglass figure was so demanding that many women of the era caused serious and permanent harm to their bodies by over-tightening corsets. When corsets are tightened to much, they push around internal organs and can cause permanent damage to vital internal organs. In extreme cases, internal bleeding can result in death.

feel free to use for your blog or website

lacing up a corset 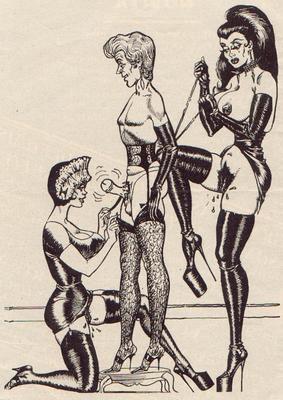 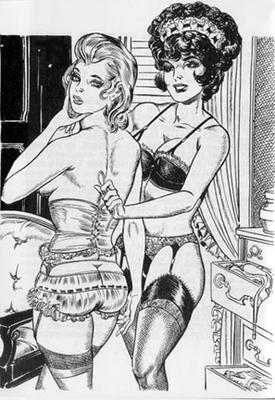 picture appears to be in the public domain
status unknown

Sandra dresses up in her domme costume, but somehow she’s always the one who gets tied up! —courtesy Trannies in Trouble

Sandra lounges in her corset and heels when she’s attacked and subdued. First she’s cleave gagged and tied, then later her abductor wraps black tape over her mouth, finally putting her in a hogtie to struggle helplessly. —courtesy Trannies in Trouble 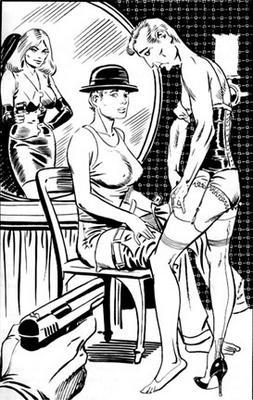 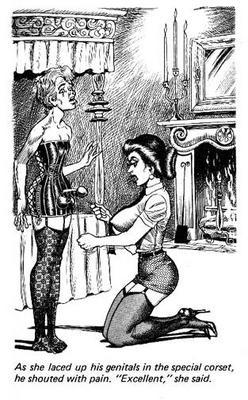 “Mine was a leather home made version. Let me start to say at 14 I was very good with tools. I pretended to be making a leather tool-nail bag for carpenter work. The peice of leather I used was thin & flexible. Since I was a secert crossdress-transgender I was good with a needle & thread. The corset was simple but firm, it realy pulled me in, I guess I made the taper too small.
“I look back now thankful I experienced this treat at such a young age.” —Robin; e-mail; 7 August 2005 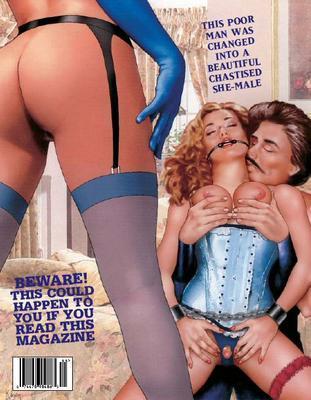 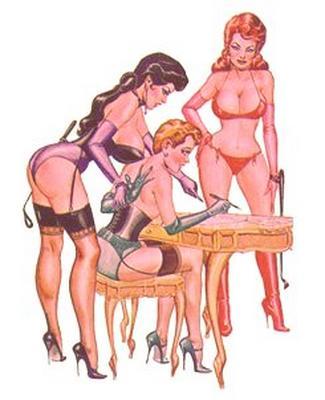 picture of Frankie in red corset posted to alt.sex.trans newsgroup by archiver@invalid.com

pictures from the internet
source unknown

picture appears to be in the public domain
status unknown

Everlicking One more deep breath and we’re done my pet. Then it’s into those frilly panties and the maids uniform. You will be kneeling at the end of the bed ready to server your Mistress. Should we need anything as we play together all night.

pictures from the internet

Based on material previously at AdultToyReviews.com

If you write, please label your message as “Sissy” to help separate it from SPAM (which gets tossed unread).