The original fantasy started as being in a fantasy/science fiction world and being a multi-class sissy heroine with a magic inflatable love doll. Actually sex doll, but they were usually called love dolls to get around archaic laws forbidding the sale of some kinds of sex toys.

The fantasy shifted to being the magic inflatable sex doll.

If your DM approves, you can use this character in your role playing games. And you can share adventures you experience (with credit).

Those without a DM can have fun preparing the character creation.

Make any changes your DM expects. The version here is likely to be over powered. In addition to any changes from your DM, you should also modify any aspects of this story to your own personal role playing style.

This is the fantasy life of Spread Eagle Doll.

I’m the Spread Eagle Doll. My legs are spread in a doggie style position or I can lay on my back with my legs sexily spread or I fit nicely for riding doll on top, facing towards or away from the sissy.

I have the classic anime style face mask with the wide open lips. I have the jumbo tits. And I have printed on sexy lingerie of fishnet stockings, open crotch panties, and open breast brassière.

There was no doubt that I am a slut and want to be triple fucked by sissies.

My doll pussy is located in a natural position. Almost all inflatable dolls have the doll temple of love on the lower abdomen front because you could’t lay on top of the ordinary inflatable doll and fuck her doll pussy if her doll peach is placed in the anatomically correct location. In those standard fuck dolls, there isn’t enough space between the slightly parted legs to gain entry.

Because of the anatomically correct position of my doll bear trap, Spread Eagle Doll can be easily fucked from the front or from the back doggie style. You can lay on me or you can hold me up.

At the time most dolls had little breasts. Spread Eagle Doll am one of the dolls with jumbo size massive breasts. Compare the standard doll Brigitte Ultimate Fantasy Love Doll and the jumbo titted Brigitte Bra Buster Sex Doll (who also had a blonde bush).

I also have a blonde bush. Almost all dolls of the time period were clean shaven to appear younger. Spread Eagle Doll still appears young enough, even with my jumbo tits and blonde bush.

Here are some pictures of the Spread Eagle Doll and the Nadia Russian Love Doll (which appeared to have the same Chinese manufacturer).

There was a series of dolls called the Aphrodite Fantasy Doll, Aphrodite Bending Fantasy Doll, and Aphrodite Sitting Fantasy Doll, as well as the Nancy Bra Buster Fantasy Doll. These had deluxe, jumbo size tits with pink nipples and soft, pliable surface. They were also water filled, with two fill holes on her back. The plastic used for her skin was different than any other dolls and felt soft. The Aphrodite series had a fully molded plastic head with crystal blue eyes and a full head of short blonde hair. Unfortunately her lips were closed and she didn’t have a mouth hole.

I have the traditional anime face mask, with the blonde hair in two pig tails held in place by red ribbon bows. My lips are bright red. I have big blue anime eyes. I have two soft ear lobes. I have a vibrating tongue and can speak spells and talk.

The Doc Johnson Hot Pussy Machine and the Doc Johnson Pussy Galore Doll were standard dolls except she had a water filled tube with a smooth, bright pink interior. There was a valve on her lower back that allowed the tube to be filled. That made her pussy warm, and you could adjust the amount of water to adjust the vaginal sleeve for a perfect fit. Also, this doll had a very long (15 inches) interior depth, as contrasted by the typical five to seven inches of dolls from that period of time. 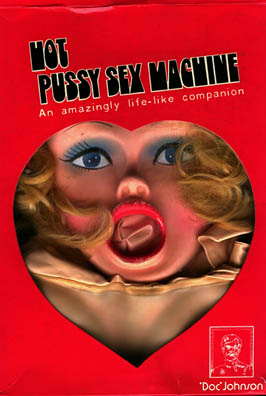 I have the 15 inch deep water filled vaginal sleeve. In cold weather a sissy can thrust her hands inside my doll pussy to stay warm. My vaginal canal can expand to fit any size cock.

The classic view when shopping for a sex doll is either a box covered with artwork or a box with a cut out showing the plastic anime face and often a glimpse of the tops of the breasts.

I can be deflated and stored in a small box that shrinks to fit into a pocket or other small space. I can peer out the transparent window of the my.

At a dramatic moment, a sissy bard can pull me out of the box and blow me up.

I have stored up time of full body animation and gain signficant animation for free while in the act of being fucked in any hole or titty fucked.

I can switch between the static positions of the spread eagle doll, kneeling doll, and standard prone doll with slightly parted legs. In any of the positions I can balance in a seated, kneeling, or standing position without any outside help.

My doll pussy is one of the soft ones with realistic inner and outer lips and an engorged clit and tight doll poontang. My inner pussy lips, clitoris, and vaginal opening are all very bright pink.

Instead of the normal doll mittens, I have plastics hands and feet with fingers and toes.

I can move my wrists, hands, and fingers to carry out selected spells and anything else hands and fingers can be used for.

I can freely move my hands (including wrist and fingers) and feet (including heel and toes) and my mouth, lips, and tongue.

Everytime a sissy fucks one of my holes I gain one minute of full body animation. I can store up my sissy fucks.

When I am double fucked, I gain a five minute bonus.

When a sissy is fucking one of my three holes or tittie fucking me, I can squirm and move around, including

I have a positronic brain. I have a memory capacity of a lot more than 800 quadrillion bits (more than 100 Petabytes) and can make more than 60 trillion operations per second.

My round tits produce any beverage of the drinker’s choice.

Sissies (or anyone) can drink honey, tea, lemon juice, any fruit juice, beer, and wine or any alcoholic beverage from my doll lotus.

My eyes can see and record any frequency of light.

My ears can hear and record any frequency of sound.

The adventuring party is turned into a group of beautiful travelling band of sissy prostitutes by the magic power of my flower, seat, mouth, and round tits.

This is the cop character.

The nurse is the healer.

The school girl is the scholar, sage, scribe, and book-based wizard.

I took the following early training:

I took the following basic training:

In my first enlistment as a scout I was assigned to courier, survey, and exploration.

I gained level 0 in the following advanced education skills: medical, navigation, engineering, computer, space science, and jack of all trades.

I gained the rank of scout and vacc suit level 1, pilot +1.

In my first enlistment in the Army:

I gained personal development of +1 strength, +1 dexterity +1 endurance, +1 education, and the skills gambling and brawling.

In my first enlistment in the Marines:

I gained personal development of +1 strength, +1 dexterity +1 endurance, and the skills gambling +1 and brawling +1.

In my first enlistment in the Navy:

Commissioned to the rank of Ensign.

Promoted to the rank of Lieutenant and gained revolver +1, SMG +1.

Promoted to the rank of Lieutenant Commander.

Promoted to the rank of Commander.

Promoted to the rank of Captain and gained social +1.

My belly button automatically changes into the female side of any tech connection.

If you want to save your story, you need to copy the text as it appears in each step and paste it into the text document of your choice.

You may get a partial web page if you run the customization at the same time I am uploading a new version. If this happens, just reload the page.

You get to pick your own character and the rest of your adventuring party to play this sissy fantasy role playing game/story.

The story is told from the point of view of an intelligent magic item, an inflatable doll that turns adventurers into sissies.

Back in the days when transvestites were actively oppressed by society, to the point of being arrested in most places in the U.S., the ground-breaking fantasy role playing game Dungeons & Dragons included a Girdle of Femininity/Masculinity that permanently and almost irrevocably changed a player character from male to female (or vice versa). As the magic girdle “seems like a normal belt”, closeted players would have their characters try on any unidentified magic belt in hopes of being able to play a female character without being scorned for being “queer” (the term “gay” wasn’t yet in widespread usage).

In this game/story, there is a magic inflatable sex doll that has the ability to turn an unlimited number of beings into sissies (beautiful looking women of their appropriate race/species, but with the male bits tucked away in a chastity).

An initial group of adventurers discovers the magic inflatable sex doll in an adventurer/magic shop and enthusiastically enjoys the permanent change to sissidom.

Unfortunately, their families and communities are horrified and word spreads that they have come under the influence of an evil intelligent magic item.

Shamed and outcast, the magic inflatable sex doll and her loyal band of adventurers find an abandoned coastal island and set up a sissy brothel.

The adventurers become the first full-time bondage prostitutes at the sissy brothel to the popularity of the surrounding areas (which include desert, grasslands, marsh, jungle, hilly, and mountainous terrains), as well as defending against adventurer groups sent out to end the sissy brothel and destroy the magic inflatable sex doll.

You get to pick your character and the characters in your party.

The story is told from the point of view of an intelligent magic item, an inflatable doll that turns adventurers into sissies.